The term "dodging" might be a little confusing at first to players who are new to it. The word "dodge" makes it seem like a defensive action, but frequently, you have already attacked and you are attempting to move to a stronger position for the next round, or, full of confidence, you might be attempting to move away from one enemy in order to attack another enemy.

When adjacent to multiple enemies, a character needs to dodge each enemy separately, and must succeed them all to be able to move away (See Examples below).

In this context, adjacent means the character or monster is within 1 cell of each other. In the diagram below, if character X is on one of the 4 squares in relation to character O, then character X will need to make a successful dodge in order to move away:

Invisible players are immune to Dodging and Locking.

The above example is sweetened and does not calculate that there needs to be a minimum and maximum amount of dodge and lock between the players.

If player O has a near number of Lock to the player X's Dodge, player X will suffer a percentage of AP and MP loss when trying to move away. This percentage can be calculated by the following formula:

To completely immobilise a target (by not letting him to dodge at all), the player needs a Lock value higher than:

For example, to completely immobilise a player with 6 MP and 10 Dodge, you would need at least 70 Lock.

With equal Dodge and Lock values, the escaping player will systematically lose half his AP and half his MP.

A player with half the Dodge of his opponent’s Lock will lose about 75% of his AP and MP while trying to escape.

If several players are Locking, the percentage of AP / MP lost is the sum of the percentages calculated for each Locking player. For example, if a player attempts to escape when he is in contact with two opponents with equal Lock and Dodge values, he will lose 75% of his AP and MP (50% x 50% = 25%). 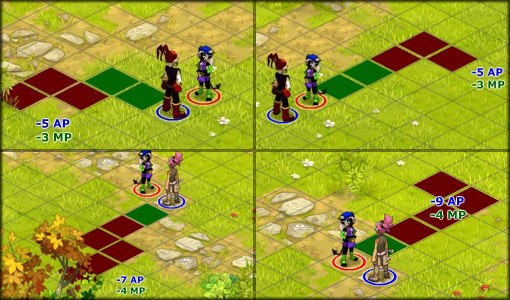 A lot of tactical decisions in a battle center around either avoiding or forcing dodging attempts. Many classes have pushback spells, like the Cra's Retreat Arrow, and any class can acquire Release.

When an Iop without having ranged spells, battles a Prespic, the Iop often has to use Jump to get adjacent to the Prespic, hoping that the Prespic will then fail to dodge the Iop.

Retrieved from "https://dofuswiki.fandom.com/wiki/Dodging?oldid=469336"
Community content is available under CC-BY-SA unless otherwise noted.