Start a Wiki
Grohlum is a boss monster.Formerly known as N, then The Exile.

Grohlum begins the fight in the invulnerable state. To deactivate this state, you must kill one of its zombie summons which are affected by the "Hoarfroast" spell, while the summon is adjacent to Grohlum. Grohlum typically casts Hoarfrost on any of its resurrected summons when they are within LoS. When Grohlum casts the spell, his sprite (should) grow. The deactivation of the invulnerable state (by killing the adjacent Hoarfrost-affected summon) is instantaneous and lasts until the caster's next turn (killing the summon with an AoE attack such as Playful Claw or Sword of Iop can damage Grohlum if the AoE affects the summon first).

Any attempt to remove MP from Grohlum gives it +8000 resistance for 1 turn. So do not attempt to damage him with incidental MP-loss spells such as Shovel of Judgment, unless you do not intend to further damage him this turn. 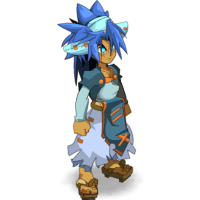 Retrieved from "https://dofuswiki.fandom.com/wiki/Grohlum?oldid=470602"
Community content is available under CC-BY-SA unless otherwise noted.