About me (Adventures Of A Squirrel)

Hello, I am AdventuresOfASquirrel. This is because, as I am writing this page, one of my DOFUS characters is a squirrel. For more information on this see Skiril Trinsfirmitinik.

I have been exploring the World of Twelve on Rosal server as a squirrel, and may be adding my discoveries to this Wikia, if they are not already here.

My current number of edits:Special:Editcount/Squirrelladventures

or click here to see them in more detail: Detailed Edit Count

It is difficult, at times, to be a squirrel, so I have decided to make it a personal project to create a method of translating squirrel language that is easier than using Secrets of the Squirrel Language.

This table is a how individual letters turn out, that is, if a letter is typed by itself, then translated, this is how it would turn out.

This is how they would turn out if they are typed in a block of letters, and then translated.

There are other peculiarities, such as, when mulitple vowels or letters that translate to "ik" are typed together, they almost always contract to "i" or "ik". Also, squirrels can never use capital letters, and the "/think" command, for some strange reason, always comes out as !tinik!.

When you are a squirrel, your sprite changes to that of a squirrel, a little larger than most squirrel NPCs or monsters. Here are some examples of a transformed player's sprite.

Note: I am no longer a squirrel, as of 23rd February 2008, because someone who is now on my enemies list aggressed me for no reason. 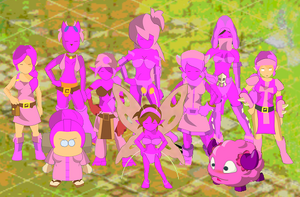 These are my characters, listed by class.

Retrieved from "https://dofuswiki.fandom.com/wiki/User:Squirrelladventures?oldid=443561"
Community content is available under CC-BY-SA unless otherwise noted.